THE MACE
The Mace is carried in University processions as the symbol of authority. Made of silver gilt, it is 1 metre long and weighs about 8.5 kg. Along the length of its shaft are two collars set with amber-red and green jade stones. Between the collars are four panels, one of which carries an engraving of the Main Building with a roofless Great Hall. It is topped by a head bearing the University’s coat of arms enamelled in colour and enriched within a buckled belt displaying the motto. On either side of the drum are full-length four-toed Chinese dragons.

The official seal of HKU
Most of the University’s records and artefacts were destroyed or looted during the Japanese occupation, but one symbol of authority survived: the official seal of HKU. During the war, the seal’s cut-steel dies were detached from the hand press by Professor R.C. Robertson and smuggles to the British Army Aid Group (BAAG), and then made their way to London. They were later returned and the seal was re-assembled with the hand press, which had been hidden in the Hotung Engineering Workshop, and continues to be used on all official University agreements and contracts.

THE OFFICIAL SEAL OF HKU

The original architectural drawings of the Main Building
The original architectural drawings of the Main Building and first faculty quarters were donated by the great niece of former Governor Sir Frederick Lugard, who presided over HKU’s founding. They were rolled tightly into a tin tube that protected them from light, dust and extremes of humidity and temperature, thus helping to retain the brightness of their colours. However, it took six months for them to flatten and to remove a build-up of surface dirt on the drawings.

ONE OF THE ORIGINAL ARCHITECTURAL DRAWINGS OF THE MAIN BUILDING

Uniforms, documents and other artefacts of the group are now part of the University Archives. So is Sir Lindsay’s sword which, because it has sharp edges, had to go through several red-tape hoops before the Customs and Excise Department would allow it back into Hong Kong in 2009.

More about this story: http://www.hku.hk/press/news_detail_6641.html

THE BUST OF SIR H N MODY
"As a young man, the advantages of education were unfortunately not within my reach, and I have to-day at my advanced age to confess myself 'no scholar'. Throughout my long life I have daily realised all I have missed for want of a sound education, and it was with the idea of in some measure providing for others what I was myself denied that I determined to offer to erect at my own cost a building which should bring within their reach those educational advantages which I have myself so greatly missed", remarked Sir H N Mody, the major donor towards the founding of The University, at the Foundation Stone Laying Ceremony on March 16, 1910. This bust was presented by the Incorporated Trustees of the Zoroastrian Charity Funds of Hong Kong, Canton and Macao to commemorate the 90th Anniversary of the University.

Every year on 12th October, the birthday of Sir H N Mody, the local Zoroastrian community commemorates his generosity to the University by having their priest place a garland of flowers around the bust. 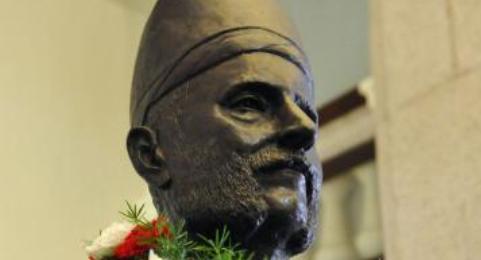 IRON SPIRAL STAIRCASE
The beautiful and decorative cast-iron spiral staircase at the corner of the chapel connects three floors at University Hall. Crafted in France, it is regarded as one of the “Three Treasures at University Hall” (the other two being the David Deers, and the dedicated cook and unofficial Hall auntie affectionately known as Sam So 三嫂). 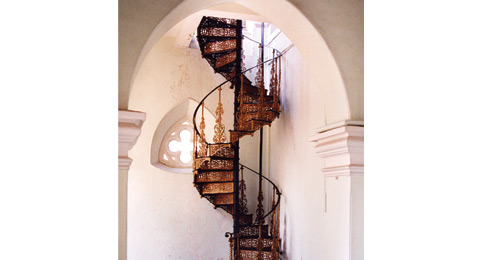 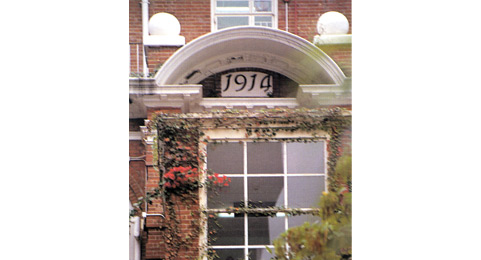 HKU has always relied on community support, even before the first brick was laid
On the occasion of the University’s Centenary, a thoughtful alumnus presents a unique part of HKU’s history to the University: a donation receipt for the sum of $600, dated 1909. 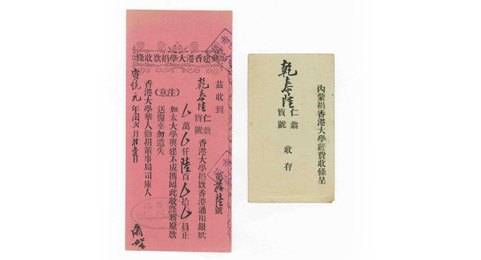 The SHIELD and the MOTTO
The shield was granted to the University by the College of Arms in 1913. It depicts a gold lion on a red background occupying the top third, and an open book, a symbol of learning, set against a divided background of blue and green in the lower part as a deliberate allusion to the island on which the University is sited and the surrounding sea.

The Chinese motto is taken from the Confucian classic The Great Learning《大學》and refers to the moral and intellectual enrichment of human lives. The Latin motto, SAPIENTIA ET VIRTUS, aptly translates the spirit of the Chinese one. The Chinese character ming (明) contains an extra stroke, and the character de (德) one stroke fewer than usual. This is deliberate. The characters are written in the lishu 隸書 calligraphic style in vogue during the Han Dynasty, and which is still used for formal inscriptions today.

The SHIELD and the MOTTO

GOLDEN TROWEL, 1910
The Foundation Stone of the Main Building was laid with this trowel by Sir Frederick Lugard on March 16, 1910. When he replaced it in its box, it was slightly bent and the damage was still visible when the trowel was returned to The University in 1948 by his heir. Two replicas in silver were handed to Wei Han, delegate of the two Viceroys of the Two Kuangs and Two Kiangs （兩廣總督及兩江總督） Chang Jen Chun 張人駿 and Yuan Hsu Hsun 袁樹勛, at the same ceremony. 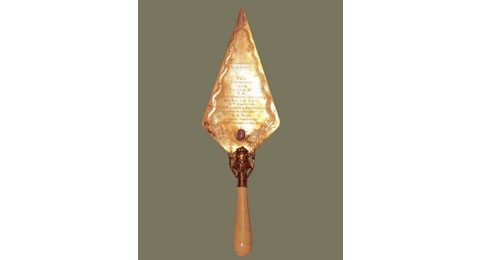 THE INKSTAND
The inkstand was made in memory of Sir Robert Ho Tung (何東) who died in his ninety-fourth year in 1956. The University Court, deeply conscious of his manifold benefactions, had it made and suitably inscribed to be put to use in the Senate Room. Wrought in sterling silver, the inkstand weighs 3.8 kg; its ornamentation is chased in deep relief. Looking out over each end of the indented 20-inch long oval base plate are modelled Chinese dragon-heads. The centrepiece is almost eleven inches high and flanked by two inkpots, with lids bearing the inscription: ‘torch of enlightenment’. 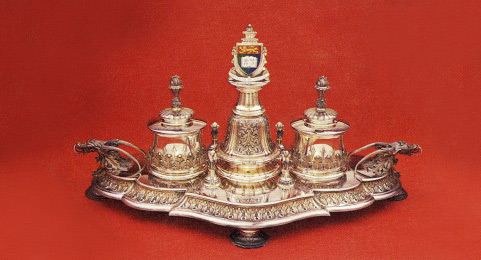 THE STATUES
Ever since Douglas Castle was built in around 1860 as a private residence, the Statues have stood guard at its front. The castle became University Hall, a male student dormitory, in 1956. No student will dare to touch them as it is believed that students who do so will fail their examinations. It is regarded as one of the “Three Treasures at University Hall” (the other two being the Iron Spiral staircase, and the dedicated cook and unofficial Hall auntie affectionately known as Sam So 三嫂.). 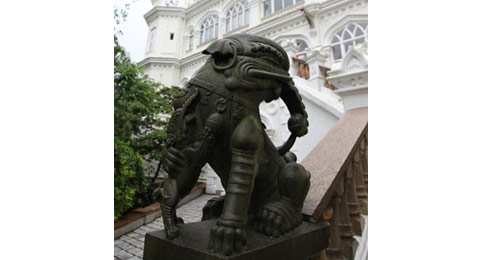 THE CLEMENTI PORTRAIT
The portrait of Sir Cecil Clementi, the Governor of Hong Kong and Chancellor of HKU (1925-1930), used to hang in Loke Yew Hall where it had been since the 1950s. Before World War II it was hung in the centre of the rotunda, which was removed from the building when the extension was added. Sir Cecil was on the original committee that proposed the foundation of HKU and he wrote the Latin verses of the University Anthem.

The oil painting was severely damaged during the War and subsequently suffered additional damage from constant exposure to changing temperatures and humidity levels, which resulted in massive paint loss and a mould infestation.

In 2011, the painting underwent extensive restoration treatment and is now kept under the custody of the University Archives. A photo replica of the portrait now hangs in the balcony of Loke Yew Hall.

OPENING FUNDRAISING BAZAAR IN 1912
Families of Chinese dolls were sold at a fundraising initiative in 1912. During the bazaar, guests were also able to visit a branch post office specially set up in the Main Building to post their letters stamped with the memorial postmark. 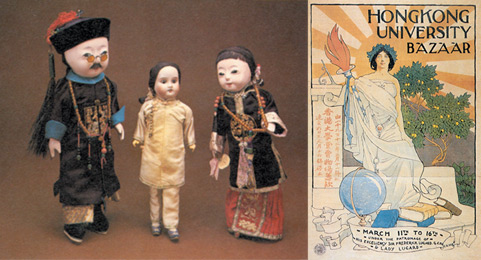 THE LUGARD TRIBUTE
The Tribute was a gift from the Hong Kong Chinese community in 1910 to Sir Frederick Lugard, the first Chancellor (1911-12) of The University. The centre piece of the satin scroll, framed by a gold border, is the text of the message to Sir Frederick and a list of 87 donors who contributed to the cost of producing The Tribute. Fifty-two donors to The Tribute were also members of the Hong Kong University Chinese Fundraising Sub-Committee. 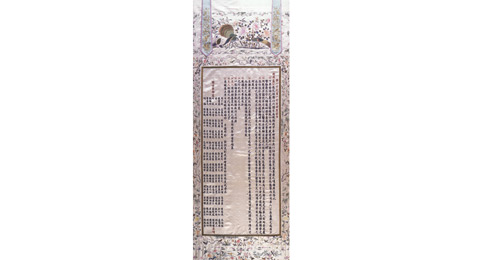 THE LUGARD TRIBUTE – THE RED SANDALWOOD CASKET
The lid of the red sandalwood casket, which was used to store the Lugard Tribute, bears the inscription "德蔭香江" meaning "Virtue shelters Hong Kong". "The graduates of this University….will exert an influence which will be unmeasurable in the future among the 400 million of China's population….that genuine patriotism whose only aim is to make their country better, greater, and to share with others the benefits they have themselves received," Sir Frederick Lugard, Foundation Stone Laying Ceremony, March 16 1910.

NAVAL GUN
A 23-ton naval gun, which was used to guard the Western approaches to Hong Kong from 1890 to 1911, was uncovered while the foundations were being prepared for University Lodge (Vice-Chancellor’s residence) on the Old Victoria Battery site in 1948. Deemed to be immovable by the Air Forces, it was declared to be the property of the University and remains situated in the garden of University Lodge as a landmark. 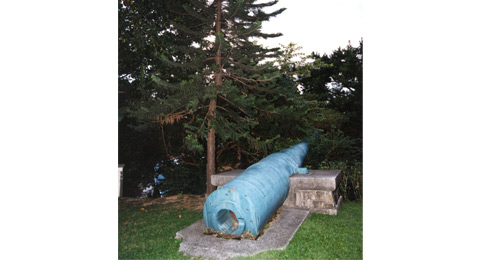 OLD HALLS CALLIGRAPHY
Zhu Guangqian朱光潛 (BA 1923, HonDLitt 1985), who received a Chinese government scholarship to study at HKU in 1918, offered his calligraphy of the name of the Old Halls (student residence) in Chinese to The University. Zhu was a distinguished scholar and educator in the field of aesthetics, and he was widely respected as a cultural bridge between the East and West. 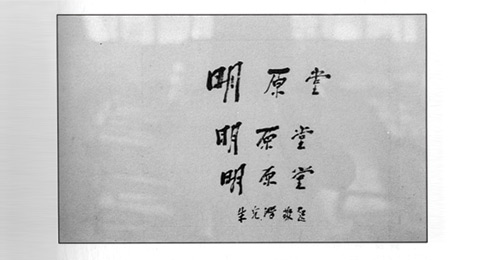 HKU STAMP
A special stamp to commemorate The University of Hong Kong’s Golden Jubilee Anniversary was officially issued by Hongkong Post in 1961. 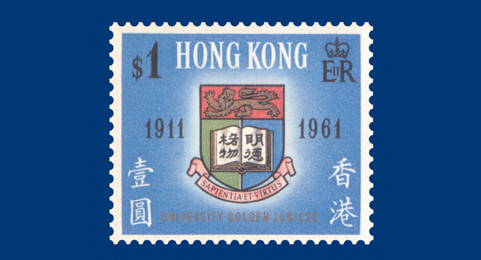 The casting of the Statue was done by Professor Situ Zhaoguang of the Central Academy of Fine Arts in Beijing, and took three years to complete. The Statue shows Sun Yat-sen as he looked in 1923, aged 56, when he visited HKU to give a public lecture in the Great Hall (now Loke Yew Hall) at the invitation of the HKU Students' Union. 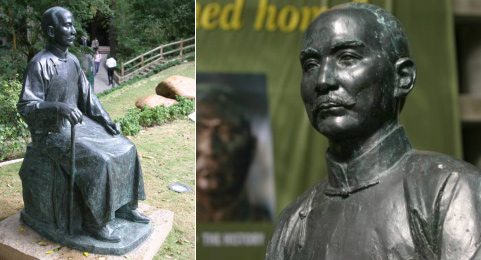 The Tang Chi Ngong Building, officially opened in 1931, is unique in the University for the use of the letter "V", as in "Vniversity", in place of the letter "U", reflecting a practice common for Latin stone inscriptions in the 1920s and 1930s. 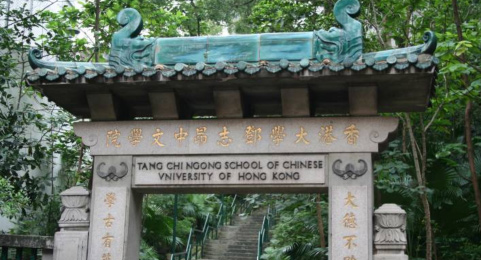